“I was coloring before I could walk, as my mother would have you believe.”

Laurence Young grew up in Newton, Massachusetts, then like a rural haven. It was in those early days of childhood exploration among the woods and waterways that he would sit for hours observing and drawing, hidden by tall blades of grass. One could say that this was a foreshadowing of what would become a lifelong career as an artist.

Laurence graduated with honors from the University of Hartford in 1974 with a bachelor’s degree in art education. In 1979, he went on to earn his master’s degree in Printmaking from Rhode Island School of Design.

Initially a plein-air painter, Laurence is now a full-time studio artist living in Provincetown, MA. Working outdoors from life has served him well in his studio. His innate color sense sets him apart, while integrating his line work which comes and goes within the work. Sometimes the drawing articulates the image while other times it adds another whole dimension.

There is a quiet and volatile quality to Laurence’s work that draws the viewer in. His love for nature is visceral while his seascapes rock gently with the sense of the waters ripple as it ebbs and flows. Then there is his figurative work that skillfully represents the figure but then is abstracted with color and shape.

Laurence has had a successful career of over 30 years as a working artist. His paintings are represented all over the country through various galleries. Young is also part of public and private collections 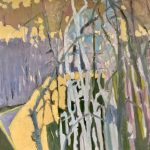